The Grand River Greenway Campaign is the culmination of the 30-year vision to protect thousands of acres of high quality natural and recreational lands along the Grand River in Ottawa County and then connect these lands with a multi-use ADA accessible trail. The proposed trail also will complete a contiguous connection from Millennium Park in Kent County to Grand Haven beaches and other destinations such as Grand Valley State University, downtown Grand Rapids, and the Bass River State Recreation Area.  In order to accomplish this vision, Ottawa County Parks plans to acquire 700 acres of additional land and construct 27 miles of new trail (with 13 miles of the trail along or near the river or other water features).  This will require $21 million in funding, with the Parks Foundation seeking $7.2 million in philanthropic gifts to leverage anticipated public funding.

“The show of support from Kent County donors demonstrates that the Grand Rapids area philanthropic community understands the regional value and impact of our vision,” said Peter Secchia, who is co-chair of the Grand River Greenway Campaign Committee and a major donor. 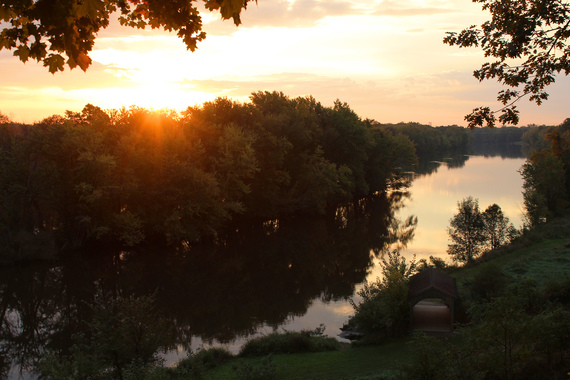 Mr. Secchia has long been interested in revitalization of the Grand River as a leading contributor and supporter of Millennium Park as well as other initiatives such as the MSU Gran Fondo, a fund-raising bicycle race from Grand Rapids to the lakeshore near Grand Haven. “One of the things that I love about this project is not only that it will make the Grand River more accessible to thousands of families, but that it will also connect Grand Rapids and Grand Haven together with a river pathway route for the first time.  People will be able to start from Millennium Park, travel from park to park, have ice cream or a burger in Jenison or Allendale, and end with a sunset on the Grand Haven Pier.”

It was this type of regional impact that drew the support of Wege and Frey Foundation trustees.

“The Grand River is an important ecological and recreational asset. Improving riverside lands in Ottawa County and connecting them to Kent County will add incredible value to the on-going work in Grand Rapids to restore the Grand River and the City’s namesake rapids” said Mark Van Putten, President & CEO of the Wege Foundation.

While the Campaign has been successful in engaging donors, Greenway Campaign committee members say broad community awareness of the value of the Greenway is not widely known. “This Greenway, with its tremendous green space and natural wildlife offerings, will enhance the physical, mental, and economic well-being of our community by increasing access to the river’s natural spaces,” said Monica Verplank, co-chair of the Greenway Campaign Committee.

Recent gifts represent great progress; still the Grand River Greenway Campaign is actively seeking additional partners. “We are very thankful for the support from our neighbors in Kent County and we hope to have more announcements to come in the near future, but our work is not done yet,” said Tom Werkman, President of the Ottawa County Parks Foundation and a member of the Greenway Campaign Committee. 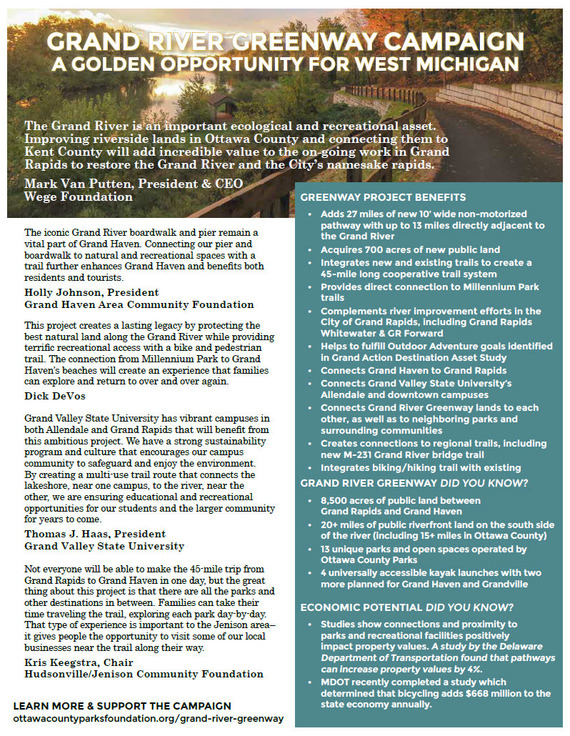 Frey Foundation, based in Grand Rapids, is one of West Michigan’s family foundations committed to making a difference in the lives of individuals, families, organizations and communities. Grants are provided to non-profit organizations primarily in West and Northern Michigan for projects that enhance child development, protect natural resources, promote the arts, and build community. We invite you to learn more about the Frey Foundation and its history by visiting our website at www.freyfdn.org.

The mission of the Grand Rapids-based Wege Foundation is “planting seeds that develop leaders in economicology, health, education, and arts, and enhance the lives of people in West Michigan and around the world.” More information about the Foundation is available at www.wegefoundation.org.